“The renowned poet, author and civil rights activist with the unmistakably regal voice died on May 28 at the age of 86.”

(Story Courtesy Of MSNBC ~ Rehema Ellis and Elizabeth Chuck)
.
Maya Angelou, the renowned poet, author and civil rights activist with the unmistakably regal voice, has died. The author of the celebrated autobiography “I Know Why the Caged Bird Sings” was 86 years old.

Her death comes less than a week after Angelou announced she would not attend the 2014 MLB Beacon Awards Luncheon, where she was to be honored, citing “health reasons.” Last month, she also canceled an event in Fayetteville, Arkansas, because she was recovering from an “unexpected ailment” that left her hospitalized. 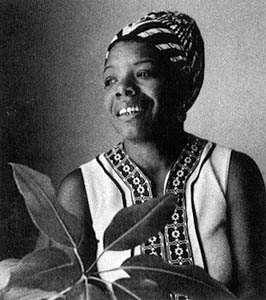 “The mayor is very saddened to hear the loss of a woman of such renowned phenomenal status as Dr. Angelou. Our prayers are with her family, her staff and all the people she has worked with,” Linda Jackson-Barnes, assistant to Winston-Salem Mayor Allen Joines, said.

Angelou was born on April 4, 1928, in St. Louis, Missouri, under the name Marguerite Annie Johnson, and was raised in Stamps, Arkansas, and San Francisco, after her parents sent her off to live with her grandmother in California when she was fresh with a white store clerk in Arkansas, the Associated Press reported.

She grew up to become a singer, dancer, actress, writer and Hollywood’s first female black director.

Angelou had an impressive list of accolades: She was a three-time Grammy winner and was nominated for a Pulitzer, a Tony, and an Emmy for her role in the 1977 groundbreaking television mini-series “Roots.”

But her success didn’t come easily. Angelou’s life struggles were fodder for her work.

Her childhood had been marked by sexual abuse, which she detailed in “I Know Why the Caged Bird Sings” — the first of six autobiographies she wrote.

A few weeks after she finished high school, at 17, she gave birth to her son, Guy. A single mother, she supported her son by working as a waitress and a cook, but music, dance, and poetry were her true passions.

Her first big break came as a singer in the 1950s, when she toured Europe with a production of the opera “Porgy and Bess.” In 1957, she recorded her first album, “Calypso Lady.”
.

.
In 1960, she moved to Cairo, where she edited an English-language weekly newspaper. The following year, she went to Ghana to teach music and drama. It was in Ghana that she met Malcolm X, coming back to the U.S. in 1964 with him to help him build his new coalition, the Organization of African-American Unity.

It was in 1970 that she published “I Know Why the Caged Bird Sings,” a painful tale of growing up in Jim Crow South, which is now on children’s reading lists in schools across the country (along with sometimes being censored for its raw account of rape and teen pregnancy).

“‘I thought that it was a mild book. There’s no profanity,” Angelou once told the AP. “It speaks about surviving, and it really doesn’t make ogres of many people. I was shocked to find there were people who really wanted it banned, and I still believe people who are against the book have never read the book.”

Between Angelou’s fiction, non-fiction, and published verse, she amassed more than 30 bestselling titles.

Angelou was also a trailblazer in film. She wrote the screenplay and composed the score for the 1972 film “Georgia,” and the script, the first-ever by an African-American woman to be filmed, was nominated for a Pulitzer Prize.
.

.
In more recent years, it was her interactions with presidents that made headlines. In 1993, she wowed the world when her reading of her poem “On the Pulse of the Morning” was broadcast live globally from former President Bill Clinton’s first inauguration. She stayed so close with the Clinton’s that in 2008, she supported Hillary Clinton’s candidacy over Barack Obama’s.

She also counted Nelson Mandela and the Rev. Martin Luther King, Jr., as friends, and served as a mentor to Oprah Winfrey when Winfrey was starting out as a local TV reporter. When she was in her 20s, Angelou met Billie Holiday, who told her: “You’re going to be famous. But it won’t be for singing.”

In North Carolina, Angelou lived in an 18-room house, the AP reported, and taught American Studies at Wake Forest University.

“What more can I add to this *Beautiful Tribute* To Maya Angelou”…
She inspired me to love what I do as a Writer and Author. She encouraged me with her words in my recovery, and showed by example how to help others from addiction. She was one of the most *Inspirational Souls* I’ve ever know, and she taught many generations of us to be better people with no Color, Race, Creed, or Religious barriers…
There will be no other like, Dr. Maya Angelou”…
.
“May You Rest In Peace In The Arms Of Our Father In Heaven”…