….
I always love sharing articles that help educate and inform the public about gambling. Especially about Slots and when they are in-depth and sharing knowledge of just how slot machines and other games are checked, monitored, and set and articles like this one give an inside look at how they work. “Their Secrets Perhaps?”

They do give some of the secrets of how the machines “workings” so those who may have a problem with gambling can KNOW THE TRUTH of how those slots are first, an electronic machine, how they can be set and programmed and changed at any given day, so why would you TRUST a piece of metal that can also trip up and NOT PAY OUT or HIT A JACKPOT AND NOT PSY due to a glitch? Sound trusting to you?

Then why sit for hours and jam a bunch of money in one?

Maybe before you go to a casino or dabble on a State Lottery video poker machine, read this article first by “The Boston Globe” Courtesy of and written by By Joshua Miller Globe Staff, June 9, 2019.

Being aware and educated is important for any consumer and gambler.

Like I always say, I don’t think gambling needs to be banned, as that would not be fair to those who can gamble for ALL THE RIGHT Reasons. Just Gamble Responsibly …And let others out here know many of us cannot and more expansion of Casinos opening is more tempting and could be a source for a Possible Relapse. ENOUGH ALREADY …

Wynn Resorts won a fierce battle for a Boston-area casino license, survived a near-catastrophic scandal involving its founder, and weathered immense public scrutiny over whether it would sell its $2.6 billion Everett casino resort.

Now Encore Boston Harbor is poised to clear a final, smaller hurdle to opening its doors on June 23. Call it the Kris Kaczowski test.

Kaczowski and other agents from the Massachusetts Gaming Commission are in the final stages of physically and digitally inspecting the casino’s 143 table games and its 3,158 slot machines to make sure they comply with regulations and have not been tampered with.

On the table games, they make sure the roulette wheels are balanced and the dice are “razor-edge” so they catch the felt of the craps tables.

On the slots, they verify that the currency readers properly scan inserted cash, check that each machine is sending information back to the state’s gaming operations center so officials can constantly monitor the action and the state’s 25 percent take, and inspect the protective housing around the computer chip that sets the odds.

“This is the brains of the machine,” Kaczowski, a former casino surveillance supervisor, said recently. He jiggled the lock on a pale gray metal box filled with computer parts inside the guts of a Money Rain Deluxe slot machine that was blinking blue and white at the state’s gaming lab in downtown Boston, filled with test models identical to the ones on the Everett casino floor. 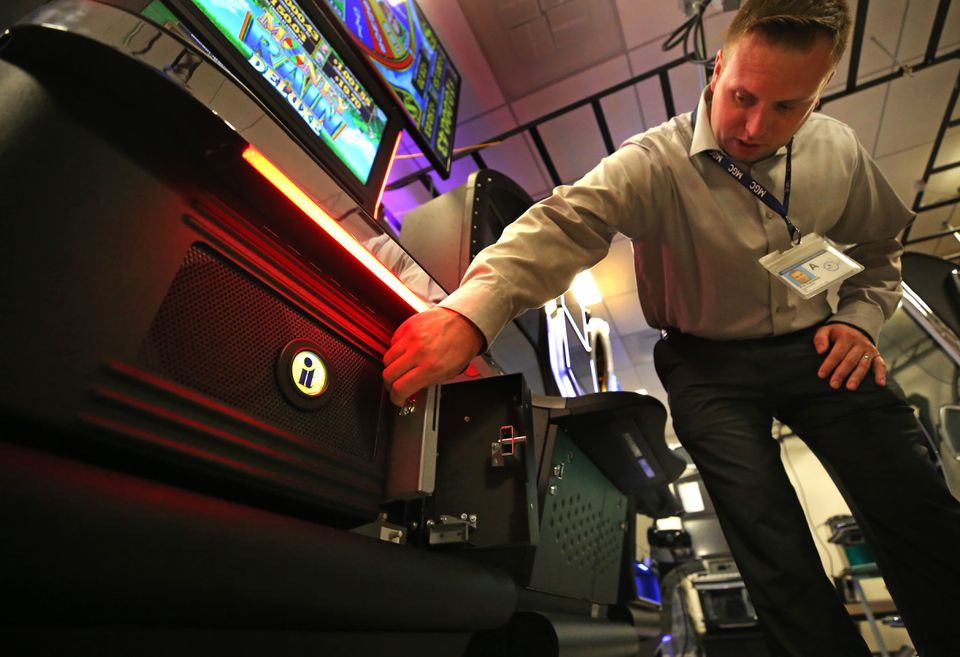 ……..
Above, Kris Kaczowski looked over a machine at the state gambling commission’s lab in Boston. In addition to checking the mechanical operations of machines, inspectors conduct digital audits.

Inside the windowless room filled with hypnotizing slots (“576 ways to win!”), Kaczowski whipped through the process agents have completed again and again in Everett in recent weeks — and at the MGM casino in Springfield, before it opened last year.

“Beyond the physical check, inspectors conduct a digital audit.”

Kaczowski tapped a screen on one slot machine and brought up an array of settings and numbers, from the theme to the game’s “return to player” — the key metric of how much of the money played will be returned to gamblers over the life of the game. State regulations require that it is at least 80 percent, but casinos will usually set it much higher than that, somewhere around 90 percent, to keep gamblers coming back for more.

Bruce E. Band, who oversees the state’s 33 gaming agents, explained that the life cycle of a machine could be perhaps 2 million pulls. So a patron who sits at a machine all night and comes away empty-handed isn’t being bilked — just getting a run of bad luck.

“That’s what most people don’t understand,” Band, a longtime gaming enforcement official formerly of New Jersey, explained with a laugh. “You say 80 percent. ‘Oh, I played $300 and I didn’t get anything back!’ Well, that [machine] might take a year to go through that.”

Agents make sure slots are programmed to follow federal and state guidelines, such as locking up a machine when someone wins $1,200 or more on a single pull, to ensure the winner fills out paperwork reporting the winnings before collecting the cash. The machines are also programmed to flag a gaming agent when — ding! ding! ding! — a patron hits the big one, a jackpot of $75,000 or more.

In those $75,000-or-more joyful moments, Kaczowski or a colleague will make sure the machine hasn’t been tampered with and check state records to ensure the winner doesn’t owe any back taxes or child support before making off with the winnings. After more than 12 weeks of checking slots and table games, state officials said the Encore should get the all-clear on the gaming machines Monday.

Wynn Resorts chief executive Matt Maddox said he is “pleased with the strong working relationship we have with the Massachusetts Gaming Commission and staff.”

“As the terrific new team at Encore works to obtain the final sets of approvals necessary for us to open the first five-star gaming resort in New England, our company’s positive partnership with the MGC makes it clear to me we will achieve our opening date of June 23,” he said in a statement.

There will always be at least one Gaming Commission agent at the Encore, which will be open 24 hours a day. That will allow the commission to keep an eye out for people trying to clean up dirty money.

“This will give us notifications if we feel somebody is money laundering,” Band said. “So if, let’s say you’re at the machine and you just put bills in, maybe pull the handle once and cash out, it sends a text to my gaming agents on the floor.”

Agents will then watch to determine if the person is simply a quirky gambler or someone trying to make, say, drug-dealing profits look like gambling winnings. Mr. Band said if it seems to be the latter, agents will hand off the investigation to the State Police.

And then there’s the Gaming Commission’s own surveillance system inside Encore, which Band didn’t describe in depth except to say it’s high-definition.

How high-definition, exactly?  He smiled.

(My opinion is? He smiled because he knows how much $$$$$$$ they will be PROFITING)  Advocate, Catherine Lyon …