“I have known Tony Roberts for quite some time. We first met here on WordPress where he first had his blog. He has a new website that is AMAZING and I started receiving his new email newsletter. I was so thrilled to see his new site and asked him if I could “Spotlight” his site here on my blog. He has been a great friend, recovery and mental health support to me.

He IS a man that stands in grace in his faith in the Lord, and I have been blessed by our friendship! So, meet Author, Tony Roberts and his book and website; “Delight in Disorder”…

This is me with Grandma McPeak. She died less than a month after making this quilt for my grandson. She was the first Bible I ever read. Her life overflowed with Christ’s love, in all she said and did.

I  first sensed a calling to be a writer at the age of nine when I composed my first poem, “Ode to My Pet Rock.”

I was born and raised in the Hoosier heartland just south of Indianapolis. I grew up worshiping high school basketball and once had the honor of playing in a televised “game of the week.”

I went to Hanover College (alma mater of both Mike Pence and Woody Harrelson – go figure). After many detours into sex, drugs, and more folk rock than roll, I wound up at a seminary and became a pastor. It was then that symptoms of depression and mania culminated in a psychotic episode that became pivotal in my life, for better and for worse.

After graduating from Hanover, I obtained a Master of Divinity degree from Louisville Presbyterian Theological Seminary. While there, I did ministry assignments at a state hospital for persons with developmental disabilities, as well as at a women’s prison, and an inner-city hospital.

I served two decades as a solo pastor. I then shifted to writing, speaking, and leading small groups. In March of 2014, I published my spiritual memoir, Delight in Disorder: Ministry, Madness, Mission. Having served in pastoral ministry and gone mad, it’s now my mission to bridge the gap between faith communities and the mental health world.

I now live to write and write to live in Rochester, New York. I also have a “delightful domain” on Lake Caroga, the gateway to the Adirondacks.  My greatest earthly delights are my four children and two grandchildren.

“What makes Tony’s devotional so compelling is that bipolar disorder continues to periodically beat the crap out of him, and he still believes.” 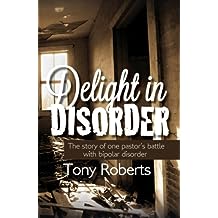 Delight in Disorder is the story of one pastor’s battle with bipolar disorder. This spiritual memoir is a house of meditations where faith and mental illness co-exist, at times fueling each other to dangerous distortion, at times feeding each other to fruitful gain. It offers hope for those often neglected and shunned. It also fosters compassion for believers towards those with troubled minds.

One of My Favorite Blog Posts From His Site:

In The Message, Eugene Peterson calls Psalm 3 – “A David Psalm, when he escaped for his life from Absalom, his Son.” The words that follow reveal a haunted poet king, surrounded and scared.

Mobs of them all around me, roaring their mockery:

David sees no escape from sure defeat, certain death. This does not keep him from crying out to God – in fact, it motivates him all the more to do so. He lifts up to God the torturing taunts of his enemies and then reminds himself just Who it is he’s talking to –

But you, God, shield me on all sides;

You ground my feet, you lift my head high;

With all my might I shout up to God;

His answers thunder from the holy mountain. (vv. 3-4)

No matter how insurmountable the odds, David believes and asserts that God’s defense is greater than human offense. God is able and willing to act mightily to answer the prayers of His children, like thunder from a mountain. This brings David tremendous peace of mind.

I stretch myself out. I sleep.

Then I’m up again – rested, tall and steady,

Fearless before the enemy mobs

God’s answer to David’s plea for protection in battle is not to fight the battle for him, but to give him rest and courage to fight with confidence.

Some years back, on a youth mission trip to Washington D.C., we were “attacked by enemies” from all sides. One girl was displaying symptoms of an eating disorder. Another was on her hands and knees, compulsively cleaning the floor while others laughed at her. The boys were vying for attention from the girls and a few were “coupling off” – dangerously close to crossing sexual boundaries.

That night (actually early morning) when I finally went to bed, I couldn’t sleep. I decided to take a walk. As I strolled the streets of the nation’s capital, I prayed to God out loud. Had someone seen me, they would have rightly assumed I was a stranger with a mental illness wandering the streets – but I don’t think they would have known I was praying.

When I got back to my room, I noticed my body relaxed, and my mind was at ease. I was able to sleep soundly for several hours and woke up feeling refreshed. The next day we had a team meeting for prayer and Bible study. It was the start of the best day of the trip – a day where we clearly saw God at work in the world within and around us.

So please visit my friend Tony Roberts new website for some “Spiritual Up Lifting” as he shares his life, his recovery, mental health challenges and LOVE and Encouragement with all who visit there. You can buy his book here on Amazon!
Connect with Tony on Social Media: