…….
Through all the hard work of advocacy and supporting the team and director, Les Bernal and others involved with “The Stop Predatory Gambling Foundation.”
….
We finally have WIN and movement toward slowing down the online sports betting venue of Fantasy Football and FanDuel! So much has come from the team of Les’s within Washington D.C. of hitting legislation hard to change the way they illegally advertise, offer, and prey on those who have gambling problems. So much so that ‘The New York Times’ has done an amazing article all about it.
…..
I’ll leave that to Les Bernal to share the news with this announcement I got by Email Today and Share The Story from The NY Times…

The court found that the law was unconstitutional, dealing a setback to sites such as FanDuel and DraftKings.  By Michael Levenson  Feb. 7, 2020, 6:23 a.m. ET

A New York State appeals court on Thursday struck down most of a law that authorized fantasy sports in the state, dealing a setback to companies like FanDuel and DraftKings in one of their most lucrative markets.

The law, signed by Gov. Andrew M. Cuomo in August 2016, declared that fantasy sports did not constitute gambling and provided for consumer safeguards, minimum standards and the registration, regulation, and taxation of daily fantasy sports providers.

In October of that year, the law was challenged by four New York residents who said they had been harmed by gambling, including one woman, Jennifer White, whose father regularly patronized off-track betting facilities in Western New York while her mother was besieged by loan sharks and creditors.

Their lawsuit argued that the law carved out an illegal exemption to the State Constitution’s prohibition on gambling, which forbids the practice except for a few exceptions, including at a limited number of horse tracks and casinos.

In 2018, Acting Justice Gerald W. Connolly of Albany County Supreme Court agreed with part of the lawsuit, holding that the law, to the extent that it authorized daily fantasy sports, violated the Constitution’s ban on gambling. At the same time, the court found that the Legislature had acted properly when it exempted daily fantasy sports from the penal code.

“On Thursday, the New York Supreme Court’s Appellate Division delivered a stronger ruling for the law’s opponents, finding both that the law was unconstitutional and that daily fantasy sports could not be exempted from the penal code.”

The ruling was based on the court’s finding that, while daily fantasy sports require skill, they also involve a degree of chance — such as whether a player might have an injury or illness or be affected by bad weather or poor officiating.

Cornelius D. Murray, who represents the four New Yorkers who brought the lawsuit, said he was pleased with the decision.

“As of today,” he said, “the legislation purporting to legalize daily fantasy sports is unconstitutional, so the penal law prohibiting it remains on the books.”

The office of the state attorney general, Letitia James, said it was reviewing the ruling and had no further comment. The governor’s office did not respond to requests for comment.

FanDuel said in a statement, “We expect that there will be an appeal and we’ll be able to continue to offer contests while that appeal is decided.” ……
DraftKings also issued a statement saying that “the legislative action authorizing fantasy sports in New York was constitutional and in the best interests of taxpayers and fantasy sports fans.”
……

Robert S. Rosborough IV, a partner at Whiteman Osterman & Hanna who specializes in appellate litigation and who has followed the case, said the final determination on the law’s constitutionality was likely to be made by the state’s highest court, the Court of Appeals. Until then, he said, customers will still be able to play daily fantasy sports in New York.

“The games can continue while the state appeals, but the future is certainly in flux after this ruling,” Mr. Rosborough said.

The Fantasy Sports & Gaming Association, an industry group, estimates that 59 million people played fantasy sports in the United States and Canada in 2017 — more than double the 27 million who played in 2009. Two out of three were men, their average age was 32, and each user spent an average of $653 annually on the sites.

DraftKings and FanDuel, which operate in 43 states, including New York, together accounted for almost all of the $390 million in revenue generated by daily fantasy sports in 2019, according to Chris Krafcik, a managing director at Eilers & Krejcik Gaming, a research and consulting firm.

New York, with its large, sports-crazed and relatively wealthy population, is easily one of the three largest daily fantasy sports markets in the United States, alongside California and Texas, Mr. Krafcik said. 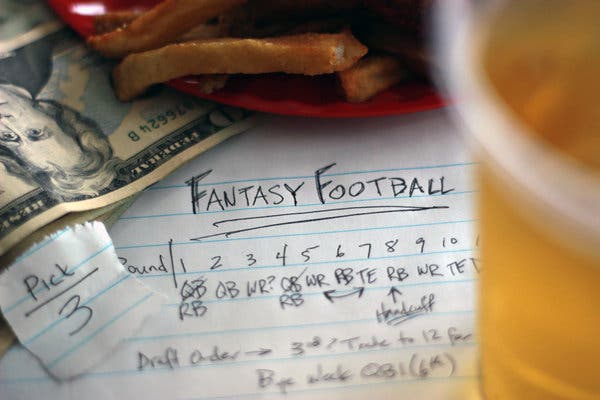